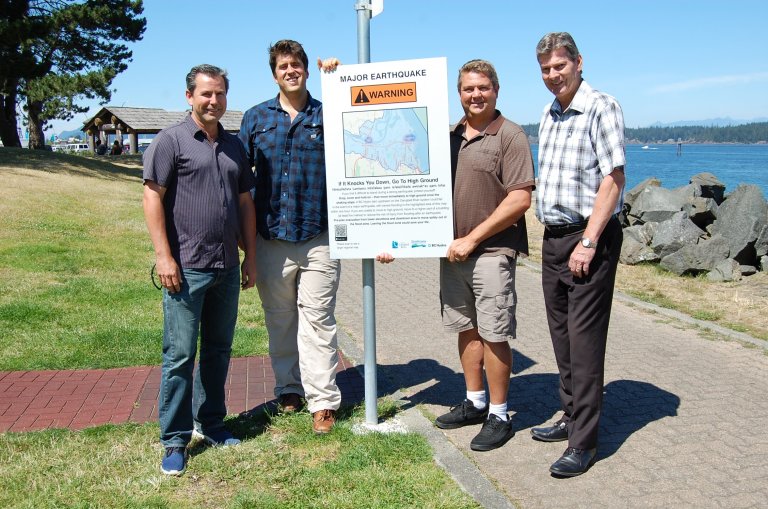 If it knocks you down, go to high ground – that’s the message on new signs to be installed in five popular locations that could be flooded after a major earthquake in Campbell River.

The sign features a warning message, a map showing the potential flood zone, evacuation routes and a QR code to scan for an online map. They are being installed at Dick Murphy Park, Robert Ostler Park and the Canyon View Trail. Two signs will be erected at Spirit Square.

The Strathcona Emergency Program also has laminated and chloroplast versions of the signs available for local businesses and organizations and some of these will be posted at various buildings owned by the Wei Wai Kum First Nation.

There is a multi-language version of the map and in recognition of local First Nations, the sign’s headline is translated into Lik’wala.

“It’s wonderful to see the Lik’wala language featured so prominently in this sign,” said Chris Roberts, Chief of the Wei Wai Kum First Nation. “I appreciate the support for our work to preserve and promote the traditional language of the Leqwiltokw people.”

Information about emergency planning, including earthquakes, is available from the Strathcona Regional District website. The district also offers an emergency notification service that can send out text messages or voice mail to those who sign up.